With so many design possibilities in crochet, isn't it so difficult to decide which to choose? Sometimes I can only begin to realize what I want after having tried a pattern stitch on the garment. Its not the same as doing a swatch as you don't see the way it drapes or how it looks combined with the other design elements. And so it is with this knit and crochet tunic project - its now taking up a lot more time than I planned. But I don't want to just finish it up and not be happy with the result. The lace pattern from the Pierrot tunic turned out too lacy combined with the knitted top. Besides it didn't feel smooth and was a bit scratchy. Halfway through the skirt's length (pic below) I frogged it! 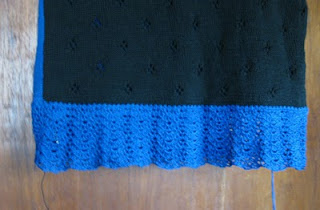 I think plain dc stitches would look and feel much better. I thought I was doing well and have done about 10 rounds (pic below), until - I looked at the back of the stitches. It looked nicer on the wrong side than the right side! So I frogged again and reversed the dc stitches :p 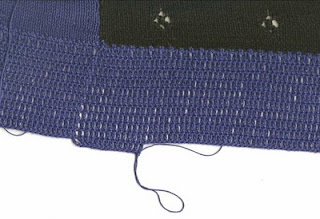 Now I'm really liking it and can't wait to finish. Haven't decided though on how to finish the edge :p

Crochet to the rescue...

Several years ago (before I got into the internet), I attempted to knit myself some tops. I chose two designs, one in black thread and the other one in blue...started with the back part for the blue, and the front for the black. (You can see the UFO's here on Ravelry) Since knitting in thread seemed to take forever, I got stock and never finished the other half of both.
It is such a pity to see my unfinished knitted tops, that I decided to rescue it - with crochet, of course :) Luckily, I can just put together the black front and the blue back parts since it makes a good color combination. I can also cover up the imperfections with crochet edgings ;)
I have already finished the neck edging (two rnds of sc), and the sleeve edging (adapted from my original tunic pattern). I'm now on the bottom part, and looks like a few more crocheting hours to get to the finish line.

For the bottom part, I'm using the lace pattern on the bottom of this tunic from Pierrot Gosyo Co..
Posted by Mimi at 10:09 PM 3 comments:

Some rambling and crochet...

I haven't had any finished projects or crochet design to post for quite a while already. I still  haven't got any for now, and unfortunately some bad news. Maybe not so relevant to my blog readers, but thought I would share.
About the second half of July, two unrelated incidents  disturbed the normal, peaceful and creative aspect of my ordinary life.
First, the vacant lot beside our house is now going to be occupied. For many years (at least 2 decades) it was left practically on its own and nature took over. There were already trees on there, most of it bore fruit and the land owner would occasionally have the fruits picked. That includes the indian mangoes on the tree pictured above. Actually, this tree and several others grew because of the seeds that we threw on there. Now suddenly, one morning that started beautiful became ugly when the unscrupulous new owner businessman, had the trees destroyed! 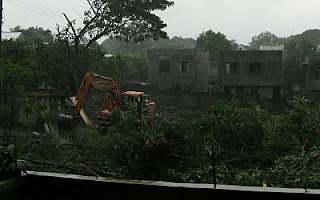 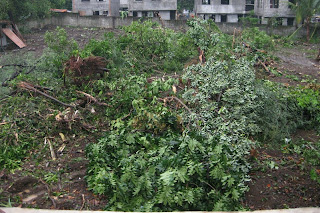 We learned that they are going to use the land for storage of equipment. That might be illegal, since our subdivision is a residential area - another issue to be dealt with :p

I felt sad to lose all the trees that provided shade and privacy. If you notice in my modeled shots, some of it were taken with those trees in the background...
So the past weeks I felt quite exposed here (since my house is on the second floor). Anyways to save on expense, I thought of some DIY solution to the problem. I bought some lattice dividers and hinges. I still have to figure out how best to prop it up. I also have to paint it, and I don't like that kind of work :p 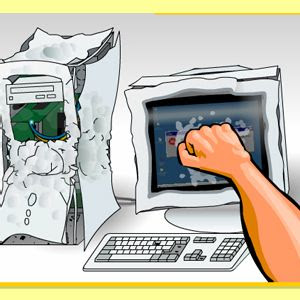 Ok, while the reality of losing the trees hasn't fully sinked in yet, my poor computer broke down! I have permanently lost some files in the hard disk :(
I don't want to account what's in there, but I know there are plenty of useful stuff. My brother saved what's left and got my computer working again. Don't know if I should bring the hard disk to a professional and pay him to retrieve my other files.My brother said there's some hope that the files could still be extracted. But I haven't decided if its worth it, or maybe I'd just start all over again :( 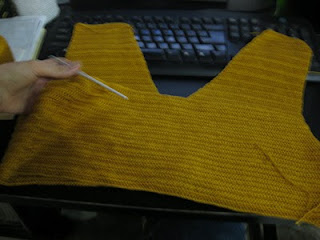 On the crochet side, I have several WIPs and don't know what to pick up! I really have to finish my SIL's tunic first. She wanted the same color and style shown on the printed pattern.
Then I need to put a curtain on my bathroom window. I want to crochet one and already made up a swatch...
Other than that, the cross-stitch project that I have to finish for my sister as a (late) wedding gift is laid on the table and I should be working on it too...
Hopefully I'll get back into designing soon. While I'm trying to do that, I might be reviewing a new crochet book, which I was told would be sent to me (keeping my fingers crossed on this). The book looks really worth it for inspiration and lovely projects to make :)
Posted by Mimi at 1:55 AM 11 comments: