At last I can say my crochet designs are now out! Actually, it was already for sale in craft stores here since last week.
Now I am done with the details on my webpages and have put links on my sidebar here.
And so without further ado, here's my new website: Mimi's Crochet Stuff

And here are my pattern designs for Coats Manila Bay:
(please click on the images to view the details) 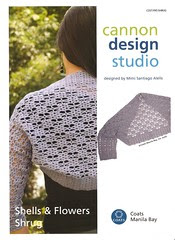 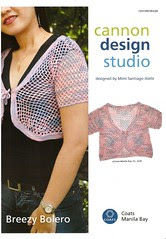 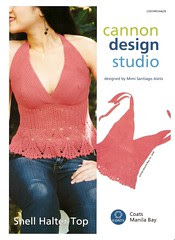 Surprises in the mail!

I got two wonderful packages from the Post Office yesterday!

Vik in Argentina sent me this for Christmas, I'm so happy I finally got it! (Probably got caught up with the tons of packages that got in the post office during the holidays...) 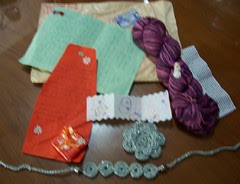 A sweet letter, a loving poem, a crocheted flower and bracelet (with cute illustration), and a skein of very lovely, precious silk yarn!

The other surprise is from my sister in London. She mailed me this two weeks ago: 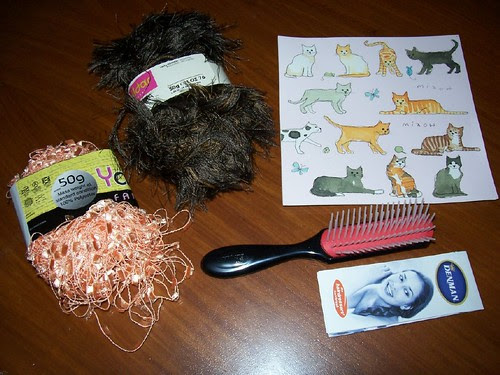 Two skeins of lovely yarns, a cute card, and a hairbrush.
I cant do without a Denman brush, so I requested one from her. (My son said there are plenty of Denman brushes here in Rustan's store, but I told him I want it to be specially bought for me in the U.K.!)

I am so spoiled with these gifts. Thank you again Vik 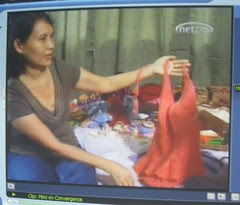 I made it on t.v.! The episode where I was shown was first aired last Sunday (Jan.14).
If you didnt see it, dont be sad...hehe...you can still watch it on Saturday. And if you are dying to see it, but dont have the channel in your area, maybe later on I will be able to share the video online ;) Thanks to my brother who recorded it :D
Thanks also to the staff of Convergence and to the host, for featuring me and making it look "interesting". I was afraid it was going to be a boring feature for non-crocheters - but my family was delighted, and I'm so glad!
Here are photos I took from the screen as I was watching the clip (over and over).
Dont be fooled, I actually wasnt able to say much :p I keep thinking I should have said this and that... Oh well, but now I can say that I was lucky enough to be featured on t.v.! 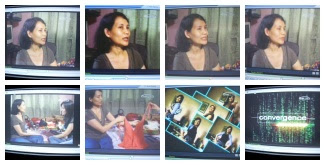 Another sack bag, but its just another color of the same design that I did last August. I started and finished this a few days before the year began, and this is my first project shown for this year. 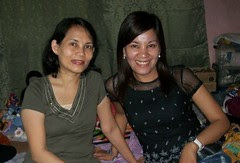 This is me with Yamie Berte, host/producer. I have just been interviewed for a five-minute segment for a local program on net-25! They will feature my crochet hobby and how I was able to develop and enhance it with the use of the internet :p
This is the first time I will be shown on t.v.! 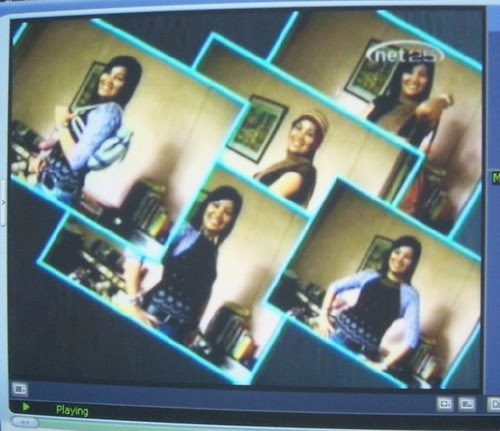 Here is Yamie modeling some of my creations.
Posted by Mimi at 12:39 PM 18 comments:

My halter design was finished and I started on my sack bag also for Coats.

, it was well worth it! I scanned and showed some old family pictures.
• Chie's lil' bag

Made a baby set of my own design, halter adapted from a free pattern.

• Not much done, I had just finished drawing the diagrams for my four patterns submitted to Coats. I took a break from crocheting :p

• The 2007 Crochet Pattern a day Calendar was released, 5 of my patterns were included.

First time I got published in the U.S.!
• I received some new colors of Cannon threads and it inspired me to create some new purse designs (will be shown later, when it is printed).
• A preview of my two latest designs - a mesh shawl

and a striped belt

for Design of the Month featuring Cannon multicolor threads.

, from my pattern design for Coats.
• I made up a coaster/mini doily pattern

and it was accepted for the 2008 Crochet Calendar :D
•

Designed another scrunchie made from multicolor threads.
• Another free pattern,

made the Filigree bookmark/bracelet designed by Cheri Mancini.

my halter featured in Coats calendar.
Posted by Mimi at 4:48 PM 6 comments:

2006 Crochet and Other Stuff Review

Highlights per month in 2006
(first half)

• scarves I made for my sister

It was a colder January last year, so I was inspired to make a cap using acrylic yarn. I made a beret cap with brim and offered the free pattern on my blog
• Garnstudio designs offered their free patterns in English and most of us crocheters were thrilled. I compiled most of the links to the Garnstudio patterns.

I joined the crochet Olympics at crochetville and took the challenge to finish a garnstudio cardigan. It was a breakthrough for me, since I have not tried before to finish up (with a deadline) something as big as this. I was so inspired getting all the positive feedback for this project!
• Two flower doilies

, and a pineapple bookmark (from Japanese books) inspired by the romantic air of Valentines.

• A hobo bag and several cell phone purses became my obsession for this month.

• I started making crocheted letters (from a Japanese book ;)

.
• A lovely belt from a free pattern offered by Mani di Fata, the Cintura con Fiorellini

• The popular fan bookmark by Crochetroo

• Came up with a lip balm holder free pattern.

• For this month, made the computer bugs by Kristie

, and the crochet necklaces by Rachel

I learned the bullion stitch by making Kathy’s Bullion stitch pincushion.
• I had my very first printed pattern available nationwide, when my Loopy Flowers free pattern sheet came out,

I really got excited over it!

Started on my first halter design.
Posted by Mimi at 2:49 PM 4 comments: