Hello! Back here again to share some of my recent crochet-related stuff!

Might be quite late for me to join in on youtube - since I intend to monetize my channel... (Google will only evaluate a channel when it reaches 10,000 views.) It is a long long way to go, but... Thanks to my friends, crochet buddies. and followers for their support - I am inspired! 😊
So far, I have 8 crochet-related videos...I guess I need to make a hundred more!..haha 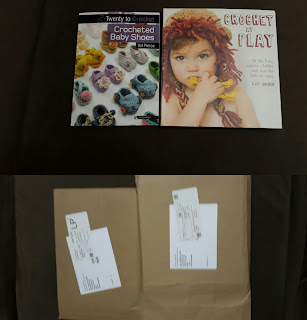 This came today, with free and fast international shipping from The Book Depository! I also timed my purchase when these books were discounted. 😉
I'm planning to make gifts for babies and kids in my family...I'm so happy how the family has grown - more nephews, nieces (includes grandnieces/nephews), and of course my very own granddaughter!

3. Crochet Design Submissions
Though my designs are few and far between, I'm still into it - wanting to get published again. I've just mailed a proposal for a top I made two years ago...goodluck to me 😀

By the way, I have contributed a pattern (Shells and Flowers Shrug) to the 2018 Crochet Calendar and have just received my complimentary copy. I submitted late and had to take my own photo...and I didn't really like it 😛. (This made me determined to take better photos next time!) 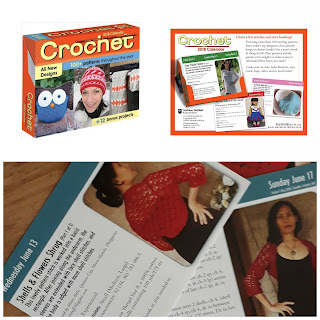 4. Modeling my Crochet
I really like wearing the crochet clothes I make - as for modeling it, I just had to...I seldom have someone else to model it for me, or even to take the photos - so I had to learn to do both. I never mastered any of the things I do, but I'm content to be able to pull things through...😊
Here's the result of my latest "pictorial" and editing efforts:


The Shell Halter Top crochet pattern is for sale on Ravelry and on Etsy.
That's all for now, thanks for looking! 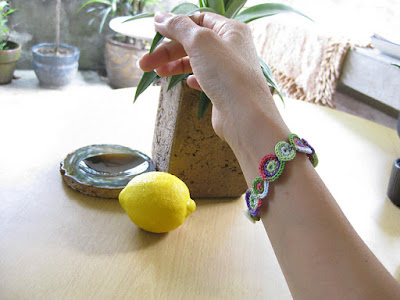 Going Around in Circles Bracelet

A stylish design for use with variegated or multicolored threads or yarn.  Any thread or yarn will do, using the appropriate size of hook.

Note: Circles are crocheted in a spiral, and worked one after another. Do not join rounds and do not cut off thread, unless specified.

How to prepare the slipper for crochet is demonstrated in my video on YouTube, please view here.


(Pattern for the strap is derived from my previous pattern found here.)

Rainy season in the Philippines has begun, and I'm glad the hottest months of this year is over. I'm back to crocheting too! Here's my current project - half-finished :)

I've always wanted to crochet sandals or slippers that can be worn outside. Ordinary rubber slippers make a good base for most crochet shoe/slipper project. The main challenge is how to effectively make holes on the rubber sole to be able to crochet on it the design that you wish. It is only recently that I've discovered a technique that works for me, its quite easy, and you'll find out about it here.

Tutorial coming soon!
Posted by Mimi at 3:38 AM No comments: 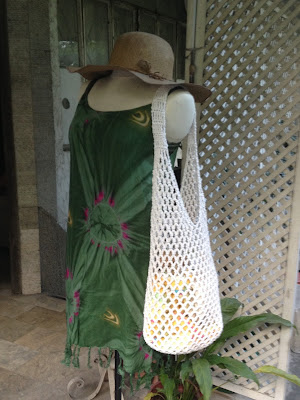 Another version of the mesh bag, this time made with 2 balls cotton twine. This is suitable as a beach bag to contain a beach towel and a few essentials. If using for heavier stuff, it is best to line the bag with non-stretchable fabric. 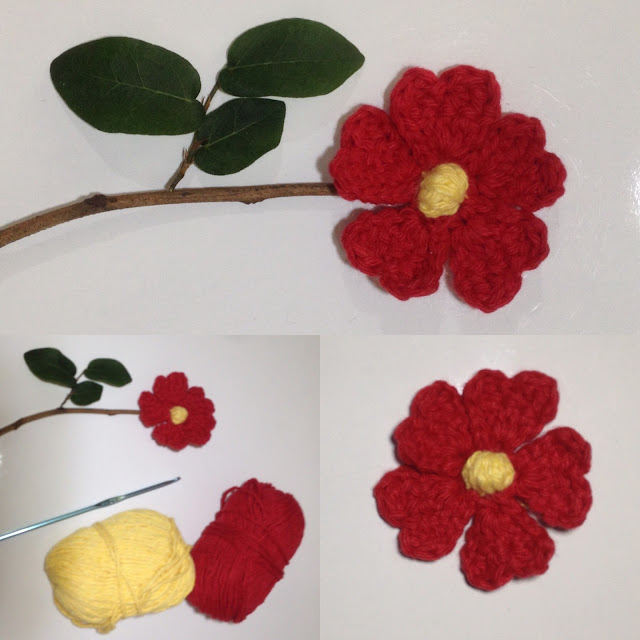 Just in time for Valentines, I saw a fabric flower with heart-shaped petals, and got inspired to make a crochet version. So here is the simple crochet design that I came up with as a Valentine treat for my fellow crocheters. Most any yarn and corresponding hook can be used for this pattern.

Hearts Flower
by Mimi Alelis copyright 2017
Note: This pattern is for personal use only, not for distribution and not to be posted on any other site.
Original link: http://mycrochetstuff.blogspot.com/2017/02/hearts-flower-free-crochet-pattern.html
Materials:
Worsted weight yarn, I used Premier Cotton yarn
Crochet Hook size 4mm
Finished size: 2.5 inches in diameter

This is a beanie hat constructed from top to bottom, with increasing rounds done in dc, and the repeat rounds done in hdc. Rounds are joined with a slip stitch, and the beginning ch 1 or ch 2 of each round is not counted as a stitch. (The joining is hardly noticeable this way.)

Bow
Make bow from fabric as shown in sample project (search youtube for fabric bow tutorial), or crochet one ....

Hat Assembly
Sew ears matching the sc sts, to the side of hat at rnds 4-7, sew back and front of ear with a little gap in-between, so that the ears will remain standing.
Sew bow in the middle of hat, facing front.
Make 6 white dots from felt cloth, using a button to trace the circles. Attach with glue. (I used hot-melt glue gun.) 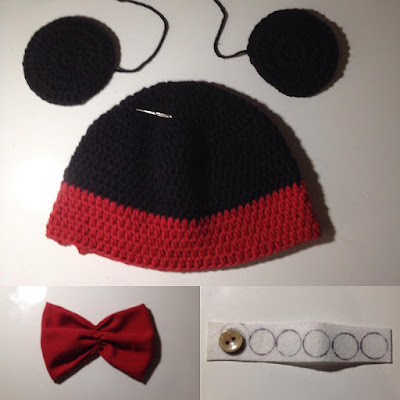 This is a beanie hat constructed from top to bottom, with increasing rounds done in dc, and the repeat rounds done in hdc. Rounds are joined with a slip stitch, and the beginning ch 1 or ch 2 of each round is not counted as a stitch. (The joining is hardly noticeable this way.)

Assembly
Sew ears at the side, along rnds 4-7. Sew bow just below one ear. Sew eyes on rnds 11-12. Sew nose on rnds 13-14. For the whiskers, use a black marker or embroider with black yarn, placing each whisker 3/4" away from the side of the eyes.


Hello! Another year has passed....and as usual I blog about the past year's projects...even though there wasn't much :p I'm thankful there's Ravelry and Instagram, where I can post projects as they happen and review them anytime ;)

The only original pattern I was able to share is the Open Weave Rattan Stitch Poncho. Since I had promised to make one each for a group of friends, it became my major project for the past year (that extended a bit this year...).


Next on my list, is my most memorable design - made in 2015, but came out and got published in 2016. Its called Limpet Lace Top and its featured in Interweave Crochet Summer 2016.


On other crafting projects - these recycled denim placemats and coasters for Papa Diddi's ice cream restaurant. I enjoyed making these :) 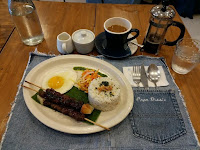 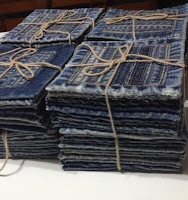 Next is my favorite crochet project - the mini Hobbes amigurumi for my son, based on a free pattern by miahandcrafter. I wasn't able to take the actual measurement, but I estimate it at 5" tall.

I also made several baby booties since I got excited for the arrival of my first grandchild last July and the birth of more babies in our clan. 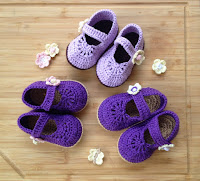 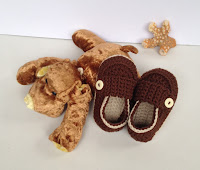 Lastly, and this is also one of my favorite project - a crochet scarf for Jackie Lou Blanco. She liked a scarf I posted on IG, and inquired on how to order one. I took it as an opportunity to make her one as a fan gift, since I believe she's one of our best actress of all time, and I'd love to see a celebrity wear my creation :) 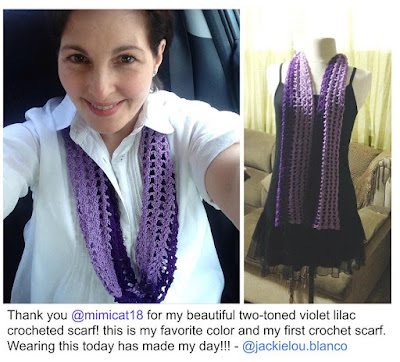