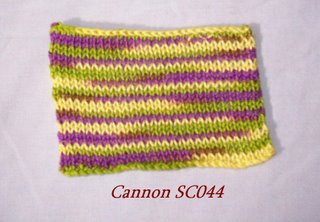 Yay, I've knitted some swatches! Just to show how these multicolor threads look when knitted. I'm amazed how little thread was needed to make these, yet it takes a while to knit just one swatch!
Maybe the same time it would take to make this:

Striped Keychain Purse
Posted by Mimi at 5:18 AM 12 comments:

These are 4 of the 10 new multicolors that Coats Manila Bay has to offer. I have made some new designs using these threads. Shown above are close-ups of the stitches on finished items I recently made. I had fun with the pattern, seeing the stripe design come up as I crochet. This is what I was talking about when I wrote on my previous post that I was "crocheting like mad!"... I was quite excited about it, I thought that Coats should publish a booklet featuring patterns with the multicolor-stripe-effect :D I have yet to come up with a wearable, though. Any suggestions?

Just in time, while writing this post, I was told that the new colors are now available for ordering. They gave me a color card for the new colors, and I just scanned this.
(Note: in this scanned image the thread doesnt look shiny, but I guarantee it is the same Cannon mercerized cotton thread that's smooth and shiny.)The photos below show a better view of the threads.

Crochet for the Holidays

Here are some of my favorite Christmas ornaments, that I made a long time ago. I had a variety of patterns from old magazines, but I made only a few. I wasnt inspired to make the more intricate ones. I made some cross-stitch ornaments too, also from magazines. I bought the plastic tree frames from a craft store here. I still have a lot of the Aida cloth :p
Most of the ornaments I made were either sold or gifted, so here are the ones that remained with me.
Btw, I went outdoors for the photo shoot, look how they seem to hang naturally on the crawling vines ;) 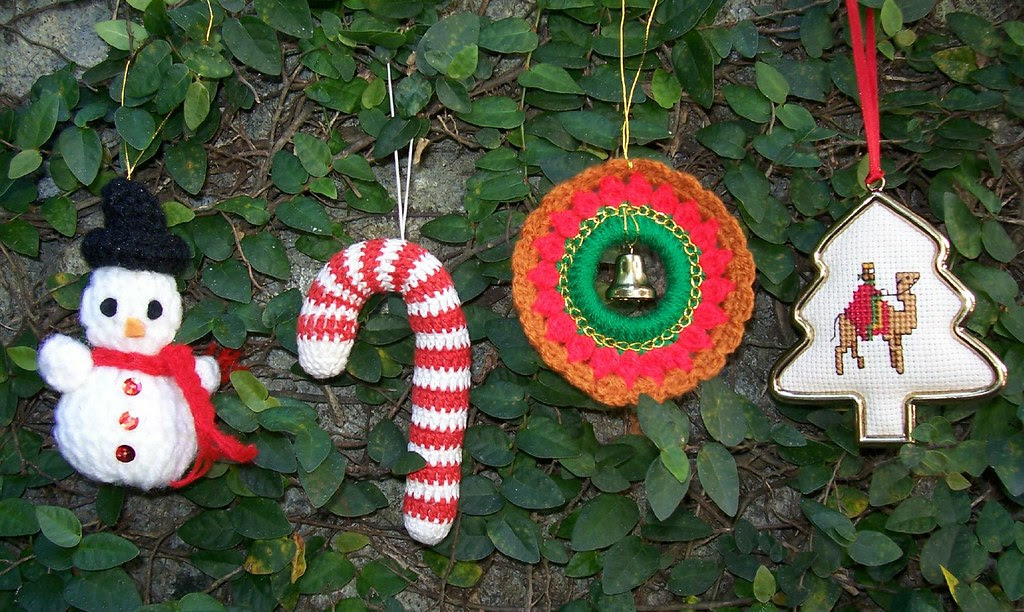 And here are some small toys I made that my kids liked when they were small.
Both were also made from patterns in crochet magazines.
The snowman is 6 1/2 inches tall with his hat ;) 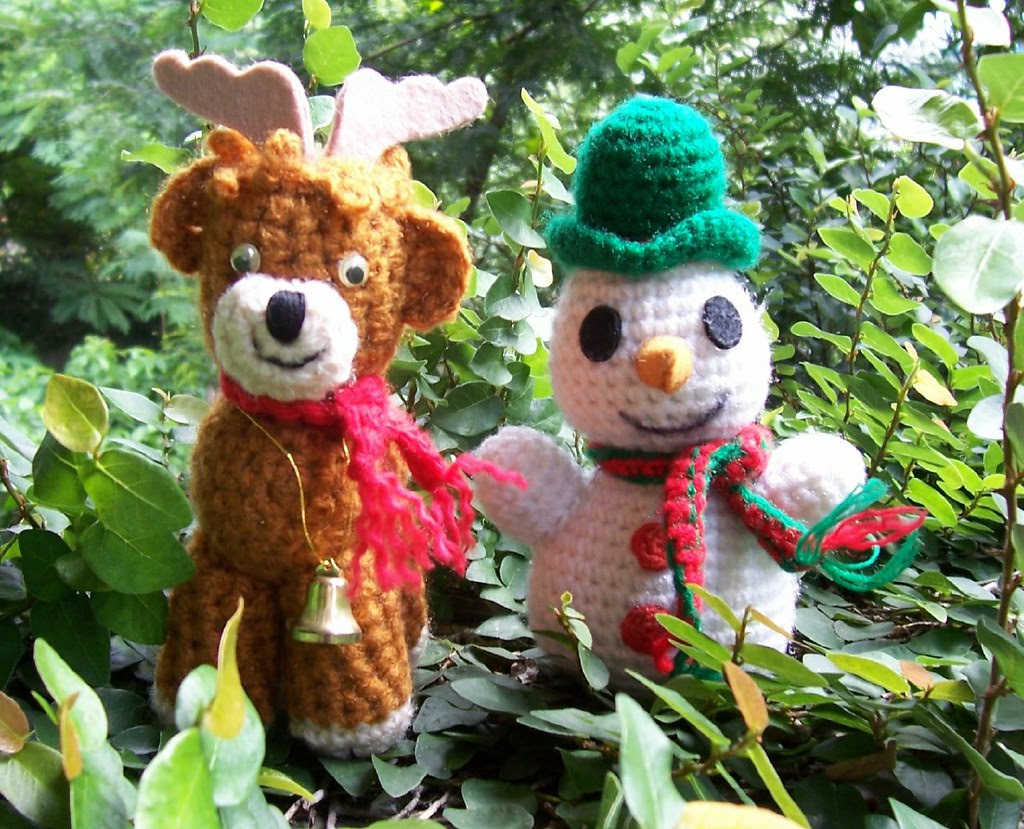 All of these are from past Christmasses. I wonder if I'll make something new for this year... still looking at my old patterns...
Posted by Mimi at 6:12 PM 11 comments:

I recently came across a site by Stephanie Syjuco, an established multidisciplinary artist based in San Francisco, California. She is a Filipino immigrant to the U.S.
Among other interesting items on her site, the one that kept me looking on was her counterfeit bag project, with crochet skills being used to imitate expensive designer bags. Did you see the cute chanel purse counterfeit she made?
As I googled on to know more about her and her project, I saw that there was an article at Crochet Me magazine about this.

I emailed her to introduce myself and let her know that I'm very interested in joining her project. But I said, I still have not decided on what bag to counterfeit, and I might not be able to start this year. I do hope the project would still be going on by next year. I'm so glad she wrote back, and encouraged me to join.

I showed her a photo of my imitation sak bag, which has remained a UFO for more than 2 years now. But I wont be submitting this one, since the bag I imitated is already crocheted, and there isnt much of a challenge in that...Also this one has been around for quite sometime.
Edited to add:
Whatever the purpose of this project, is apart from my intentions in imitating a famous designer bag. For me this project is merely for art's sake, to interpret an expensive bag design in my own homemade version. No profit is intended to be gained from this. This is not similar in any way to the manufacture of imitation designer bags, mass-produced and sold everywhere. 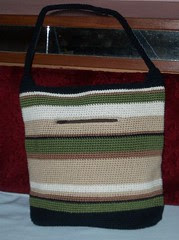 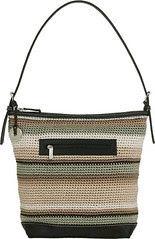 Yes, I slept with a stuffy nose, itchy throat, dry eyes and slight fever. I thought a good night's sleep would get rid of it, but still I woke up to this: 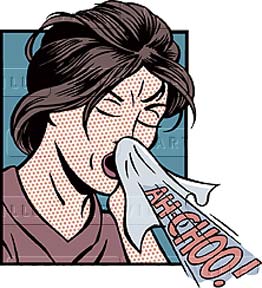 Its been a long time since I had a cold, now I had to get one at this time of the year...

This is a post about my November update. Actually, there isnt much to update with for now, but I've created a new page and it can be viewed now on my soon-to-be launched website here.
I dont have anything else to blog about except...
I just designed another small item, a different kind of scrunchie. You can see the link to the pattern on the same page.
Posted by Mimi at 3:43 AM 5 comments:

Email ThisBlogThis!Share to TwitterShare to FacebookShare to Pinterest
Labels: ramblings

I remembered this only now, after I had read Sue's post on making her childrens' costumes.
When my younger son was in pre-school, about ten years ago, I made him a cat costume. Nothing great, but I was proud to use my crochet skills in making this, and that my son was happy about it. Actually I only made a hat and a tail (not in picture) - the gloves, I just cut off the tips of a machine-knitted gloves and hemmed it, and I did the face make-up. I have not seen the hat again, I dont know if its still here... 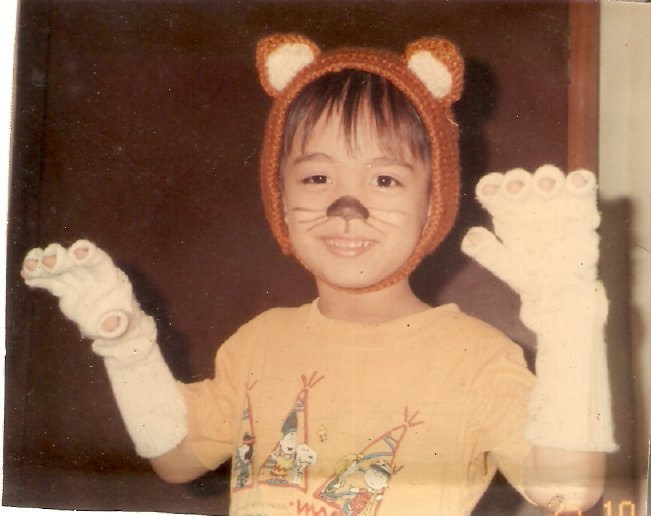 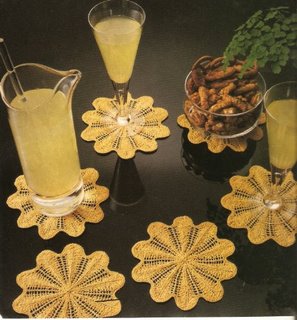 I was browsing through my magazines yesterday, and saw this picture of knitted coasters. I thought it would be much easier to crochet it, considering that I hardly knit, so I tried to make one. I couldnt make my design work with 10 repeats, so I did it with 8. I made a coaster size and another one with a bigger hook, for a small doily. (Photo: McCall's Knit & Crochet for the Home, 1989) 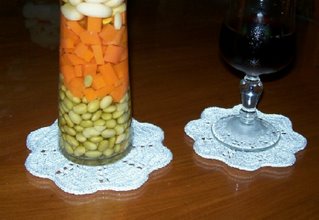 Here it is. Obviously, the knitted original has a more detailed design. But this crochet version is surely a lot easier to make, and looks pretty too. I used cotton threads with metallic for a more elegant look.
I immediately submitted this one for the 2008 Crochet Calendar and I'm so glad that it got accepted!
Posted by Mimi at 4:51 AM 15 comments:

Do you want to be on the cover of your own magazine (or have someone willing to be on it)? Maybe you want to try creating your own design for a cover at Flickr Toys .
It isnt as easy as it looks, but if you got some time to spare, this is fun to do.
I did this one to preview my new site as well as my new designs. This is just for practice ;) My sister did not know I'll use her pic :p 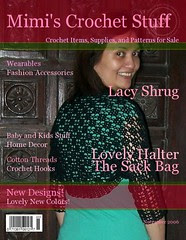 Please stay tuned for the announcement of the link of my new website at googlepages.com.
Posted by Mimi at 4:30 AM 9 comments:

I want some brownies! 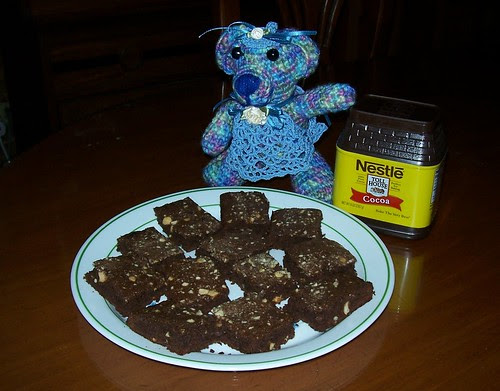 Today I suddenly decided to bake some brownies. I had plenty of good reasons to:

1. Its my younger son's favorite, and he's always asking me why I've not been baking anymore.
2. I had all the ingredients and its been here for weeks, cant stock them up any longer.
3. I used to bake brownies for someone's birthday, if I had to prepare something, because it is the easiest and most appealing to everyone.
4. Someone's celebrating her birthday today, but I couldn't send her the real thing, so here's the photo to show her that I remembered =)
5. That someone also sent me the crocheted bear posing there along with the Nestle cocoa, which made the brownies taste soooo good!

HAPPY BIRTHDAY TINA!!!
(TimelessCreations )
Posted by Mimi at 5:39 AM 6 comments: