If you are sending packages overseas, try the postal service or other reliable service. I don't think DHL is one of them. Here's my story:
Yesterday, I got a knock on the door saying it was a delivery. I wasn't too thrilled since I was limping on the way, I needed to go downstairs since my house is on the 2nd floor. Then my left leg ached and cramped, due to prolonged abnormal walking. Anyways, I wasn't totally attentive to the DHL delivery guy, but I realized he was handing me a bill. I glanced upon the box that he held and read Andrews McMeel...before I could get excited about it, I examined the bill and it had some computations with the total amount being P1,585. That's about $35! I said, "I have to pay this to get the box???" He said, yes. (I don't remember him being courteous). I asked him for an explanation on the details of the amount stated there, and he said I better call the office and he pointed the phone no. on the bill. I didn't want to call the office since I know that they have a ready explanation for it. Besides, I think I'm not supposed to pay anything, being just a recipient.
I told him I wasn't going to pay. He asked me to sign and receive the paper. I said, "I'm not going to sign that. I'm not going to get the box." And I sent him off.
Darn. I would have been leafing through the pages of the crochet calendar by now :(... and I should have copied the details of the bill so I can file a formal complaint. There was even a customs tax there for about 265pesos...I wonder what law they based that tax on? I never experienced any problem or paid a tax on the items with the numerous packages I sent and claimed at the post office. 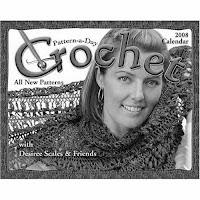 At first, I thought that the distributor of the calendar wanted me to pay for the delivery. But after I have received a reply from the publisher regarding the incident I narrated, I believe that the problem was the DHL service. They probably get away with charging the recipient even though the delivery has already been paid by the sender. I could guess how some people get fooled, and most don't file complaints, especially the Filipinos here who are eager to receive a package from abroad.
I will get my free copy of the calendar, I'm sure. I have to wait several weeks, but that's ok.
Posted by Mimi at 11:52 PM